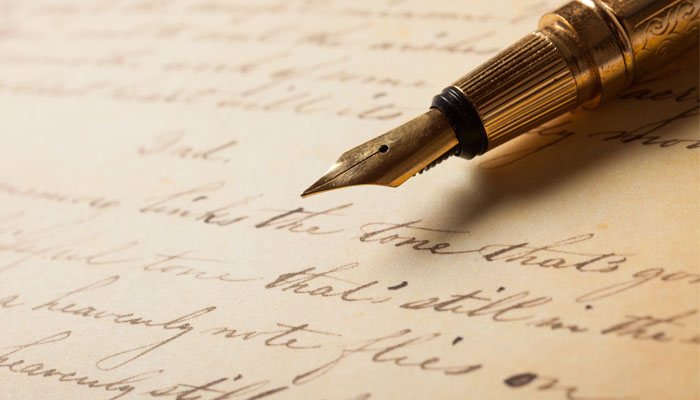 Before the advent of phone calls, texts and emails, letters were one of the primary ways by which people communicated. Some of the most notable events in history are recorded on papers that were sent between parties. Here are three historical letters that have significant import.

Perhaps no historical letter has been so lighthearted yet had more of a historical impact than one written by an 11-year-old to presidential candidate Abraham Lincoln.

Lincoln had long sported a cleanly shaven look, which portrayed his jawline well but left his face “so thin” in this girl’s view. She encouraged him to grow a full beard, stating that his face would benefit from the beard and that “all the ladies like whiskers.”

The girl received a response from Lincoln, in which he questioned whether growing a beard for the very first time wouldn’t be a “piece of silly affection.” Lincoln paid the girl a personal visit on his way to being inaugurated, though, and pictures show the rest.

Lincoln’s beard ultimately didn’t help him secure the presidential election, since women couldn’t vote at the time. There’s no word on whether Mary Todd Lincoln liked the beard — but the girl undoubtedly got a very ticklish hug.

“Bombs of a New Type”

Albert Einstein wrote to President Franklin Delano Roosevelt on August 2, 1939. Einstein alerted the president to the research of Leo Szilard and Enrico Fermi, which could cause “[a] nuclear chain reaction in a large mass of uranium.” He was concerned that this would create “extremely powerful bombs of a new type.”

President Roosevelt directed the government to support this research, in order to secure the military might before the Nazis did. Several historical letters exchanged hands, creating the Manhattan Project. The tragic ending that Einstein foretold fell on Hiroshima and Nagasaki six years later, and continues to be a threat during international military confrontations today.

The 9-year-old girl’s political strategy for Abraham Lincoln would have even more merit today, thanks to a letter that Tennessee House Representative Harry Thomas Burn received.

The Tennessee legislature was voting on whether to ratify the 19th Amendment, which would give women the right to vote in elections. Burr’s vote was needed for the amendment to be ratified by Tennessee, and Tennessee was needed to reach the 3/4s majority that constitutional amendments require.

Burr wore a pin on the outside of his jacket that indicated he would vote against the amendment, but there was something else concealed inside his jacket. Burr cast a surprise vote in favour of the amendment, thus providing the lynchpin vote that women’s suffrage needed.

When asked why he voted in favour of the amendment, Burr pulled out a letter from his breast pocket. His mother had written the letter, admonishing him “don’t forget to be a good boy.” She thought the good thing to support women’s suffrage, and Burr felt that “a mother’s advise is always safest.”

How To Translate Flash Games?

Why Maintaining The Ergonomics Is So Important For Health?

How is financial engineering used within risk management?